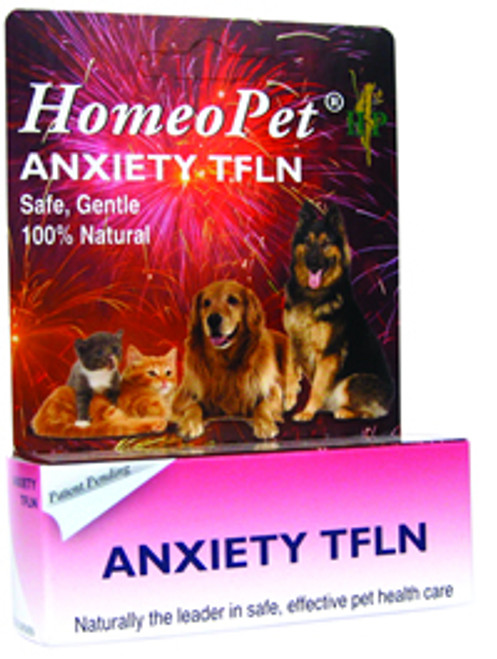 Your Pet's Symptoms Possible Causes Suggested Remedy Barking, whining, howling, yelping crying Pacing, panting, restlessness Hiding under table, in bathroom, behind couch Cowering, trembling, shaking Drooling, vomiting, pooping Destructive behavior Bolts, runs away Storms (thunder, lightning, wind, heavy thunderous rain, tornados) Change in barometric pressure Fireworks, firecrackers Loud noise/traffic noise/airplanes flying by Gunshots, bangs, explosions Anxiety TFLN Thunderstorms Fireworks (Liquid drops)   Ingredients Borax 6c & 30c: (Borate of Sodium) Gunshots, loud noises, sudden noises Chamomilla 6c & 30c:        (German Chamomile)  Sensitivity to wind, promotes a sense of calm Phosphorus 6c & 30c: (Mineral Phosphorus) Thunderstorms, changes in electro-magnetic fields Rhododendron 6c & 30c: (Rhododendron chrysanthum) Fireworks, general storms Theridion curassavicum 6c & 30c: (Orange spider)     Noise induced tremors in the environment, sudden movements, noise INDICATIONS:  Specific phobias to fireworks, thunder, lightening, loud noises, bird scarers, gunfire, backfiring from vehicles, general sensitivity to any sudden noise, or in some cases where there is sensitivity to anything sudden.  Starting from external impressions.  Fear of storms, electromagnetic storms or fields.  Fear after electrical shocks, sensitivity to winds or drafts.  Fear of explosions such as mining, shell explosions, quarrying, fog warnings and seismic testing. FORMS:  Liquid                  PACKAGE SIZE:  15 ml bottle DOSING: DOGS/CATS:  Under 20 lbs/10 kg, 5 drops; 21-60 lbs/ 10-30 kg, 10 drops; 61-100 lbs/ 30-45 kg, 15 drops; over 100 lbs/45 kg, 20 drops.  In acute cases (those with sudden onset), the doses can be given every 15 minutes, up to 4 doses.  For cases that are not acute (chronic long term problems), one dose 3 times daily; this is often best started 5-7 days before any situation causing anxious behavior, e.g. before a fireworks display.  Once a response is seen, administration should be reduced to 2 times daily and eventually once daily.  If reduction causes symptoms to worsen, original dosing may be continued a little longer before reducing.  If a remedy is working well and dosing is not reduced, an aggravation of symptoms from overuse may occur.  Stopping the remedy for 3 days will reverse the symptoms, and then treatment can begin as if using for the first time, weaning down as mentioned above. BIRDS:  A caged bird can be medicated with 2 drops in the drinking water daily.  SMALL MAMMALS:  Rabbits, ferrets, hamsters and pot bellied pigs can be dosed by weight as for cats and dogs in previous section. For severe cases a drop can be diluted in 1 ml of water or other oral rehydration fluid and given to the patient orally, taking care to avoid aspiration of the fluid into the respiratory tract by the patient.  3 doses whose volume is appropriate to the size of the patient should be given from the diluted product over a 24 hour period, e.g. 2 drops for a mouse or small budgie, 4 drops for a large guinea pig.  For acute cases it can be repeated as for cats and dogs in previous dosing section. ADMINISTRATION:  Optimally, the liquid preparation should be dropped directly into the mucous membrane of the mouth including lips; ideally in dogs by pulling out the labial pouch, and in cats by raising the head until the mouth opens.  Where an animal finds this distressful, or an owner is unable to comply, the medication can be put in the food, water or milk.  Where animals are sensitive to the odor of the alcohol preservative, a 10-20 minute period should be allowed for dilution and evaporation before the liquid or food is presented to the patient.  Occasionally, animals will shake their heads as a response to the alcohol preservative; cats may salivate excessively and in these cases, presenting it in food, water or milk works.  It can also be added to a sprayer and misted in the air around severely affected patients to calm them down. FURTHER ADVICE:  Basic precautions such as closing windows and curtains, putting on some background music, or similar cover noise, to further muffle the trigger noise, having company with the pet where someone will sit and calmly talk to the pet and stroke, it if this is appropriate to the pet, will all enhance the efficacy of the medicine.  Desensitization with CDs designed to combat phobias can be useful as can be behavioural therapy.  The use of diffusers can be done alongside this medicine, but will not in all cases enhance the effect.  The patient should be treated both with and without the diffuser. Chemical sedation can also be used alongside Homeopet Anxiety, but it should be possible to use much reduced doses to give the same level of anxiety reduction, consequently with reduced side effects and can, in many cases, be done without completely. ADVERSE EFFECTS AND CONTRAINDICATIONS:  None known, other than reversible effect of  overdosage.  Overdosage will result in a return of symptoms after the symptoms have initially disappeared.   Where either increased anxiety or a return of symptoms occurs while on the medication, ceasing to use it will alleviate the effect.  Patients who are hypersensitive to homeopathic preparations will show response to a single dose, which may not need to be repeated for some time.  For this reason therapy should always start with a single dose and should a major response be seen, therapy should not be recommenced until symptoms relapse, and then only a single dose given for maximum effect.  Although there is no evidence that there are any safety issues, extra care should always be taken when dealing with pregnant animals.  Should a suspected adverse reaction be seen or advice needed, please contact HomeoPet LLC (contact information at bottom of sheet). DRUG INTERACTIONS:  None known for animal use only.  Keep out of reach of children. PHARMACEUTICAL PRECAUTIONS:  Store at room temperature, out of direct sunlight, and away from strong odors. USER SAFETY:  No adverse effects have been recorded.  There have been reports to the company of beneficial rather than adverse effects.  As homeopathics are active in humans, care is advised when handling product.  Although a long history of homeopathics used in humans shows a very high safety margin. ENVIRONMENTAL IMPACT:  To date none found Authorization#, NDC#:  61571-0542-01 HomeoPet MSDS sheets were written by a licensed, practicing veterinarian and homeopath.  Information is for professional use only.